* Mentioned Rate is an estimate of the treatment. 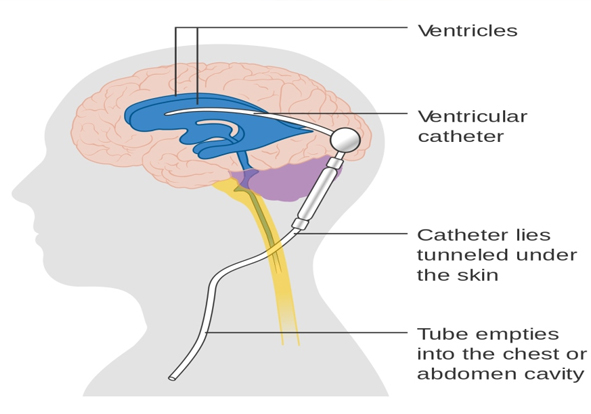 Our brain is constantly bathed in a cerebrospinal fluid that maintains the function and operation of the brain itself. The fluid goes on about the brain through cavities situated very deep in the brain, known as ventricles. However, if this cerebrospinal fluid (CSF) starts to accumulate in these ventricles, then its size may increase, causing pressure on the brain or the spinal column. This condition is known as hydrocephalus and it is one of the major causes of brain function impairment and damages to the brain tissue.

Hydrocephalus can occur at any age, but is mostly observed in infants and aged people. Many therapies are available to counteract the symptoms of functional issues due to the excess accumulation of cerebrospinal fluid, however, the surgical method to achieve the proper level and maintenance of cerebrospinal fluid is known as Ventriculoperitoneal Shunt surgery or VP Shunt.

CSF is responsible for providing the brain a cushioning effect alongwith the maintenance of pressure and removal of the waste products. This liquid is secreted by the tissues lining the ventricles of the brain which spreads to other regions during the functions of the brain. Over-accumulation of CSF can cause these effects to minimize, which can lead to serious complications in the brain. The surgery of VP shunt mainly corrects the symptoms due to the retention of excess CSF and corrects all the issues due to the extra pressure of the fluid.

The symptoms that may be the reason your brain surgeon chooses to perform a VP shunt vary depending upon the age of the patient. Some of the causes are common for all age-groups, whereas some can be observable in a particular population. The general indications that can be seen in the case of a hydrocephalus can be denoted as:

The preliminary treatment will be done by a basic neurological exam which will check for your muscle condition, well-being, movement and the speed of the functions taking place. Mainly, different imaging methods are used to detect the cause of this condition. The most common imaging procedures are;

After it has been established that the treatment shall now proceed only by surgery, the physicians will organize you for the upcoming operation. The guidelines the physician may give you to follow before and during the procedure are:

The hospital caregivers will check for your case history, any alcohol or drug use, previous medical histories, any allergies, etc. Then they will check for any complications in your pulse or blood pressure.

Before the procedure, you will be given anesthesia at the position of the incision or will be made fully unconscious according to the type of surgery determined by the physician. Any personal items like jewelry, piercings, dentures, contact lenses will have to be detached during the procedure.Planning before the procedure may comprise of shredding the hair over the operating site. The surgical team may give you antibiotics to monitor the growth of infective microorganisms.